THE ROAD TO MANDAWA

A SMALL TOWN IN THE SHEKHAWATI REGION OF RAJASTHAN, MANDAWA IS FAMOUS FOR ITS OLD BUT STILL ATTRACTIVE HAVELIS WITH THEIR COLOURFUL FRESCOES. BY GITIKA SAKSENA

I find myself on the road to Mandawa. The last stretch of the six-hour-long drive from Delhi is spectacular; a smooth velvety road cuts across an arid grassland. Twisted skeletons of dry Acacia trees add character to the landscape. We enter the busy chaotic main road in town. Among the nondescript bylanes, the glorious past plays peek-a-boo. Colourful frescoes on the walls, ornate wooden doors, deep wells marked by pillars — the town invites travellers to its famous havelis and beckons them to peel through the dusty layers of time.

This haveli has been completely restored and is now a hotel. Getting off the car, I am greeted by walls of lime and mud, embellished with beautiful traditional paintings. The main entrance is crowned by two stone elephants paying obeisance to an idol of the Sun God. Thick colourful borders demarcate rectangular panels with paintings of floral motifs, elephants, men and women in traditional attire, et al. As I walk past the boundary wall on the right, I discover ever more interesting designs including a British man riding a Penny Farthing-esque cycle (a type of bicycle with a large front wheel and a much smaller rear wheel). A flight of steps leads us to the inner courtyard of the double- storeyed haveli. The art inside is stunning, with contiguous stretches of panels running across the four walls. Mural artists, locally known as ‘chiteras’, were commissioned by the Marwaris to paint the facades, the columns and walls in the courtyards, even the inner chambers of the havelis. Natural colours mixed with cow urine were used to enhance the life of the frescoes. Initially influenced by the Mughal or Persian schools, the designs later drew inspiration from the Jaipur school of art after the decline of the Mughal empire.

Mandawa attracts a lot of French tourists with a keen interest in art and architecture. As I walk down a bylane, a gaggle of kids follow, imploring me in impeccable French to choose a guide among them. ‘A golden painted room’ – a sign outside a haveli piques my interest and I step inside the courtyard of the Jhunjhunwala haveli. A small contribution made to the resident family, and I have a ticket to step inside the room. With all the windows shut, I widen my eyes to adjust to the low light. A gold leaf painting of Lord Krishna and his gopis on the ceiling is the show stopper here. 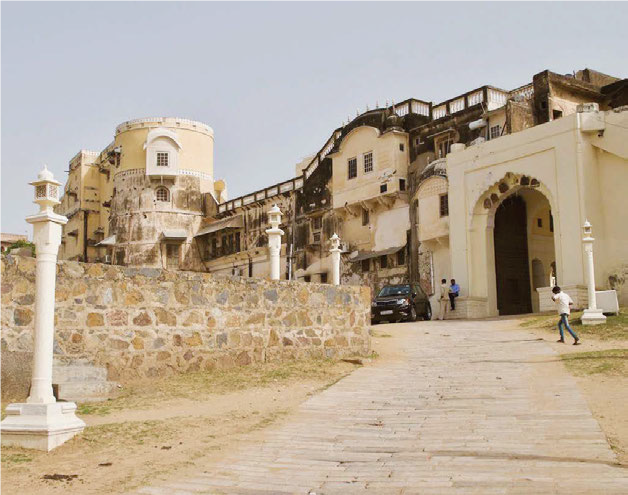 The Mandawa fort was built by Thakur Nawal Singh. Now called Castle Mandawa, a section has been converted into a hotel. The story of Mandawa starts in 1755, when Thakur Nawal Singh decided to fortify his trading outpost . A Rajput royal, he ruled over Nawalgarh and Mandawa towns in the Shekhawati region of Rajasthan. Caravans on the Silk Route were passing through Mandawa, and it was necessary to assert control. Trade prospered and soon, the Marwari merchants and moneylenders from neighbouring regions in Rajasthan set base here. They built beautiful havelis to mark their growing affluence.

THE NAWALGARH TWINS
Do visit the neighbouring town of Nawalgarh, 28 km away from Mandawa, and explore the well-preserved Poddar and Morarka havelis. They have retained their old glory. The frescoes here can be broadly classified into three styles: decorative (including floral designs, flowers, leaves, birds, horses, etc), portraits (of gods, kings, soldiers and public figures like Jawaharlal Nehru and Swami Vivekananda) and descriptive (with scenes borrowed from mythology and anecdotes – an army of soldiers and elephants, a couple in a hot air balloon, a lady listening to a gramophone, et al). The incredible aspect about these frescoes capturing scenes from Europe is the fact that the artists had never been to these places. They imagined them, based on the anecdotes shared by the Marwari merchants who had travelled abroad.

My next stop is an interesting haveli, one which is however, not in the best of shape. Built for two brothers, it has two identical wings, and thus named as the Double Haveli. The havelis of Mandawa were built to suit the needs of the business and household. They were walled on all four sides, with the open courtyards bringing in light and ventilation. The rooms had thick wooden ridged doors, with imported Belgian glass fitted in semi-circular cavities at the top. The outer courtyard was meant for visiting traders, where the value of the deals were negotiated. The inner courtyards of the havelis were meant for family members.

A KALEIDOSCOPE OF JOYS