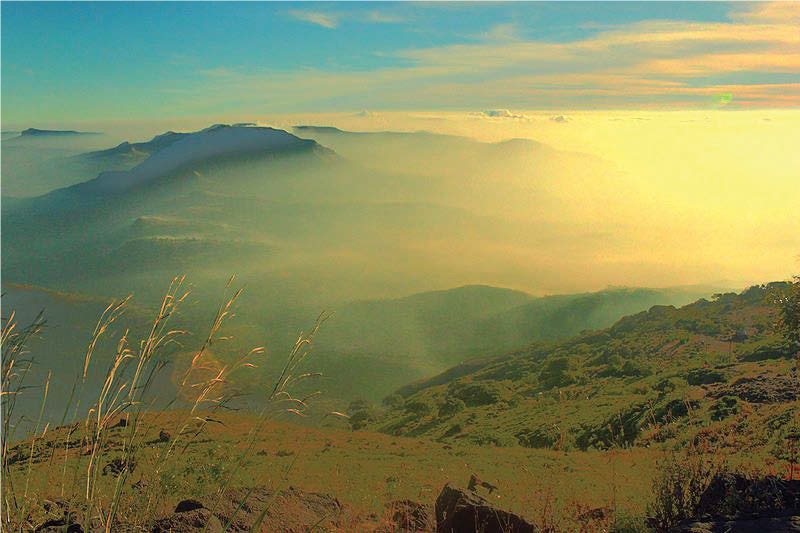 COME MONSOONS AND THE LAKES AROUND PUNE FILL UP, THE CITY LOOKS CLEAN AND FRESH AND THE HILLS ARE DRENCHED IN GREEN. THE CITY THAT WAS ONCE KNOWN AS A RETIRED MAN’S PARADISE, SEES MANY ENTHUSIASTIC TREKKERS SCALING THE SEVERAL FORTS THAT SIT PERCHED ON HILL TOPS ALL AROUND. BY PRANJALI BHONDE

Maharashtra has a rich history of rulers and invaders that saw a lot of forts being build for fortification during the era of Shivaji and the Mughals. And thanks to the presence of Western Ghats, Pune is the focal point for many a trek that are located at over an hour’s drive from the city. So brave the rain and undertake these mesmerizing treks that give you a chance to witness nature at her most beautiful.

Drive up to: Bari village

Kalsubai is the highest peak in Maharashtra (1646 m) and is popularly called the Everest of Maharashtra. The trek starts at Bari village, 15 km from Bhandardhara and winds its way up through lush green valleys and waterfalls. The trek is a mix of easy-toascend slopes as well as treacherous rocky areas overlooking the valley. The trek winds through paddy fields and a wildlife sanctuary that spreads from Kalsubai to Harishchandragad. The final part of the trek is a moderately steep climb made easy by iron ladders built along the slope. The other route via Indore is provided with stone steps along with iron chains. The highest point, Kalsubai peak (5400 m) is reached after a walk through clouds and rocky terrain. Your reward — gorgeous views of the adjoining forts and a chance to walk in the clouds. This truncated peak holds the Kalsubai temple that has a traditional prayer service every Tuesday and Thursday. Navratri is marked with a fair organized each year at the summit with many stalls being set up near the summit to provide pooja materials to the devotees. 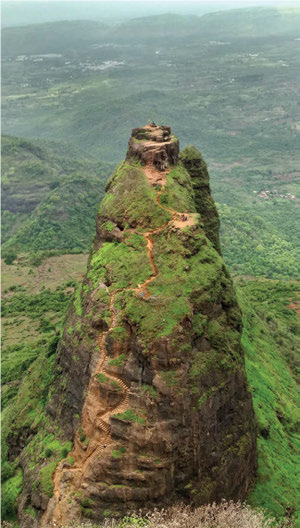 Drive up to: Thakurwadi

Located 276 km from Mumbai, brace up for this amazing one day trek to Kalavantin Durg situated between Matheran and Panvel. This trek starts from the base village at Thakurwadi and presents a brilliant introduction to the flora and fauna of the Sahyadris, taking you through some amazingly stark mountain scenery. The Kalavantin Durg trek is divided into two phases — first an uphill terrain till Prabalmachi from where the trek forks into two — Kalavantin Durg and Prabalgad. The fort is adjacent to Prabalgad Fort between Matheran and Panvel and can be reached by deviating through Shedung from the Mumbai-Pune Express Highway. The trek is fairly tough and is recommended only for experienced trekkers. The Kalavantin trek follows a steep upward climb through rock cut steps that wind their way up to the fort. The trail passes through lush green thickets and narrow valleys only to end in a panoramic view at a height of 2,300ft. The ‘Durg’ was initially used as a watch tower. The view from the Durg is mesmerizing, an undeterred view of the adjoining landscape and spectacular views of the Sayadris. The trek also presents an opportunity of sampling the local village food at Prabalgad wadi and capturing snippets of village life and farm. 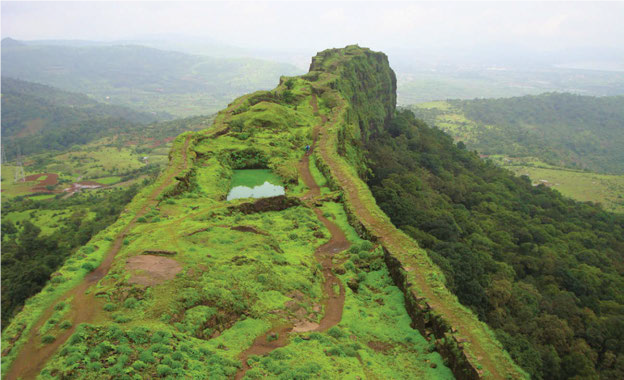 Drive up to: Lohagad village near Lonavala

Located 63 km from Pune close to Lonavala, Lohagad stands for “Iron Fort” in Marathi. It is a choice location for trekkers this season for its fairly easy climb. Shivaji Maharaj captured Lohagad in the 17th century, but he was forced to surrender it to the Mughals by the Treaty of Purandar. He recaptured the fort soon after and used it for keeping his treasures. The fort has witnessed several dynasties during its history — Satavahanas, Chalukyas, Rashtrakutas, Yadavas, Bahamanis, Nizamshahis, Mughals and Marathas. Although there are two ways to the Fort, the best is via Bhaja caves that include 22 rock cut caves that date back to the 2nd century BC. The trek up is relatively easy with wild flowers and lush green dotting your path. It’s a climb of 450 odd steps to the fort (1033 m), that is shrouded in clouds and mist during the monsoons. Enjoy an amphitheater view of the Indrayani- Pavna basin and the Sahyadris. There are four doors to the Fort — the Ganesh Darwaja, the Narayan Darwaza, Hanuman Darwaza and the Maha Darwaja. The Maha Darwaja is an architectural wonder with fortified strong walls. Trekkers can choose to hike up to the neighbouring Visapur fort which is connected by a small range.

Drive up to: Sinhagad village or Atekar Vasti though there is a motorable road that takes you to the top of the fort.

If you are looking for a trek where you can pack in adventure and fun, this one’s just for you. Located at an hour’s drive from Pune, Sinhagad is a favourite trekking destination for most Punekars. Many trekkers can be seen making their way to the top on any given Sunday, taking in the expansive views of the hills shrouded in green. The fort was earlier known as ‘Kondana’ but after the battle between the Mughals and the Marathas in 1671, it came to be called Sinhagad . There are two ways to trek up to the fort — either from Atekar Vasti or you can drive right upto the forts parking lot. The climb to the top is fairly easy and takes two hours approximately. But as you make your way to the fort, you will be met with two ‘darwazas’- the Kalyan Darwaza and ‘Pune drawaza’. Do not miss out on the ‘Kade-lot’ – the cliff where prisoners were thrown off, ‘Hawa point’ – where the wind will literally blow you off your feet and also the famous cliff edge that was scaled by Tanaji Malusare with his monitor lizard. And while you take in the beauteous views of the Khadakwasla Dam, relax and feast on the crisp ‘kanda bhajis’ and ‘zunka bhakars’ , that have almost become synonymous with the fort. Harishchandragad Fort located in the Ahmednagar district of Maharashtra dates back to the 6th century Kalachuri dynasty while the caves around the fort were carved in 11th century. The fort is steeped in history and there are references to it in various Puranas. In the monsoons, the surrounding hills are drenched in green, the withering landscape is revitalised and the lakes fill up. The trek is daunting if you are a novice and is a steep climb upwards from the base village at Khireshwar. You can choose to visit the Nageshwar temple near Khireshwar that has beautiful carvings and houses a 1.5 m long sculpture of Lord Vishnu in the sleeping posture. The trek meanders through ponds, caves and peaks and presents an introduction to some notable places of interest like the Saptatirtha Pushkarni, Kedareshwar Cave and Konkan Kada. As you trek upwards, the route winds through Kedareshwar Cave which houses the Shiva Linga that is completely surrounded by water and is picturesque. The Konkan ‘Kada’ (resembling snake’s hood), inclined at almost 80 degrees, looks down upon Konkan region. If you are lucky, you may spot a circular rainbow from the cliff during the monsoons.