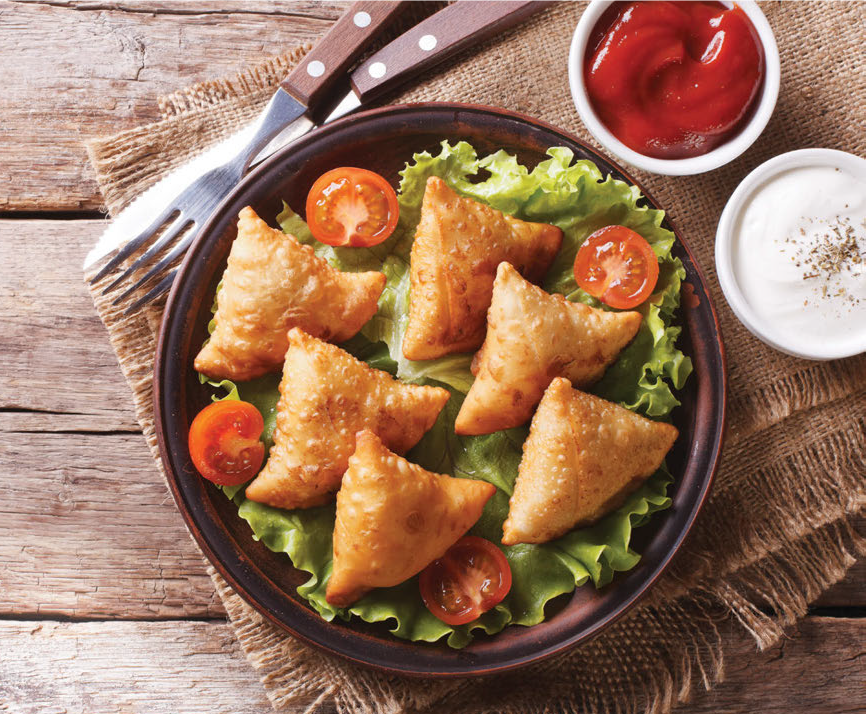 UNKNOWN TO MANY, THE HUMBLE SAMOSA COMES WITH A RICH HISTORY, HAS NUMEROUS VARIATIONS AND IS ALSO POPULAR IN MANY COUNTRIES ABROAD. BY AARTI KAPUR SINGH

Lets get this straight at the very outset. The ubiquitous samosa – our very own popular snack at every railway station, every city bazaar and every canteen – was never ours. Yes, it is true.

Be it an evening chat with friends at the street corner khoka, or a sophisticated business meeting in an air-conditioned room, the call for a samosa remains a constant. But the neatly folded, tightly packed savoury goodness that we thought belonged to India actually travelled here all the way from Central Asia centuries ago. But thanks to its amazing appeal, it cleverly adapted to the local’s tastes and happily settled among the foodies of South Asia (yes, it is even popular in China and Korea) and became a staple offering.

From Egypt to Libya and from Central Asia to India, the stuffed triangle with different names has garnered immense popularity. Originally named samsa, after the pyramids in Central Asia, historical accounts also refer to it as sanbusak, sanbusaq or even sanbusaj, all deriving from the Persian word, sanbosag. The samosa is claimed to have originated in the Middle East (where it is known as sambosa ). Abolfazl Beyhaqi (995-1077), an Iranian historian, mentioned it in his tome Tarikh-e Beyhaghi. 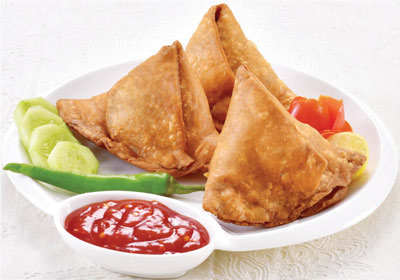 Samosas were introduced to the Indian subcontinent in the 13th or 14th century by traders from Central Asia. Amir Khusro (1253–1325), a scholar and the royal poet of the Delhi Sultanate, wrote in around c. 1300 CE that the princes and nobles enjoyed the “samosa prepared from meat, ghee, onion and so on”. Ibn Battuta, a 14th-century traveller and explorer, describes a meal at the court of Muhammad bin Tughluq, where the samushak or sambusak, a small pie stuffed with minced meat, almonds, pistachios, walnuts and spices, was served before the third course of pulao. The Ain-i-Akbari, a 16th-century Mughal document, mentions the recipe for qutab, which it says, “the people of Hindustan call sanbúsah”. Samosas were brought to India by various Muslim merchants, and patronized under various Islamic dynasties in the region. In South Asia, it was introduced by the Middle Eastern chefs during the Delhi Sultanate rule, although some accounts credit traders for bringing the fare to this part of the world. Nevertheless, from its humble beginnings — in older days, people would cook the mince-filled triangles over campfire and eat them as snacks during travel — the samosa has come a long way. And after having earned the blessings of Indian royalty, the snack soon became food fit for the king. 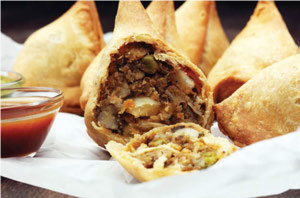 Commonly, samosa is the gorgeous, deep-fried, twisted pack of spicy goodness that oozes with chicken, meat or potato. Few family gatherings or iftar parties are complete without this signature snack. There are few snacks that couple as perfectly with tea as samosa, and the chai-samosa team is probably the reason behind thousands of brainstorming sessions and heated discussions. 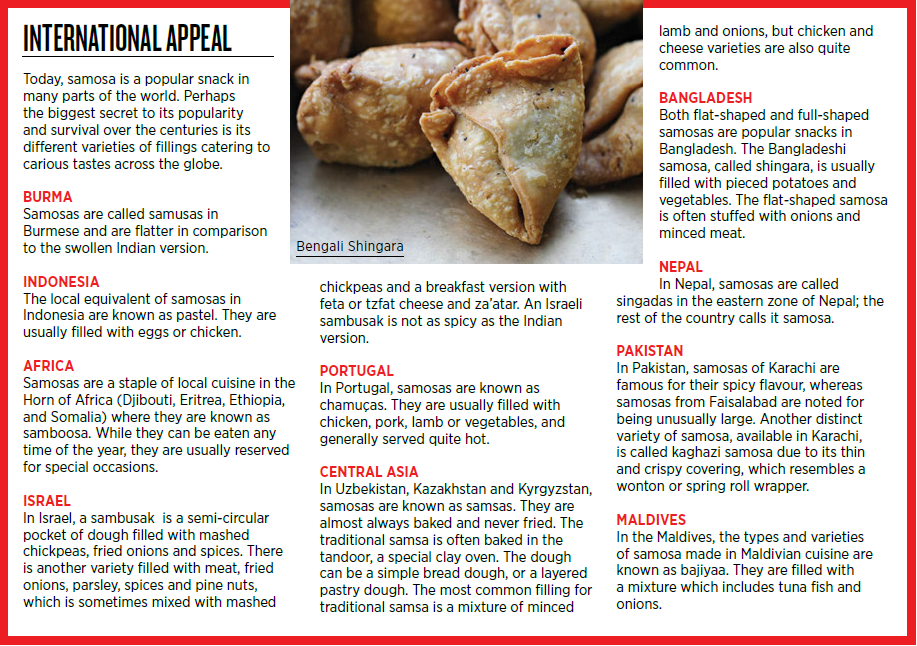 The samosa offers you the ultimate tongue seduction. The tantalising taste emanates from the triangular tetrahedral golden-fried pastry, filled with spiced mashed potato and vegetables, or ground minced meats. The varieties available in samosa know no limits. From the regular, meat/potato stuffing to spinach, corn and peas, to sweet halwa or coconut filling, the list is endless. The adventurous few may even want to foray into seafood samosas. Just dip them into chutney of your choice (those who even imagine samosas with ketchup, please reassess your priorities), and savour the taste that has weaved its magic forever.

After its arrival in India, the samosa was adapted as a vegetarian dish in Uttar Pradesh. Centuries later, it is one of the most popular vegetarian snacks in India. In North India, the pastry is prepared from maida flour and houses fillings such as a mixture of mashed boiled potato, green peas, onion, green chilli and spices. 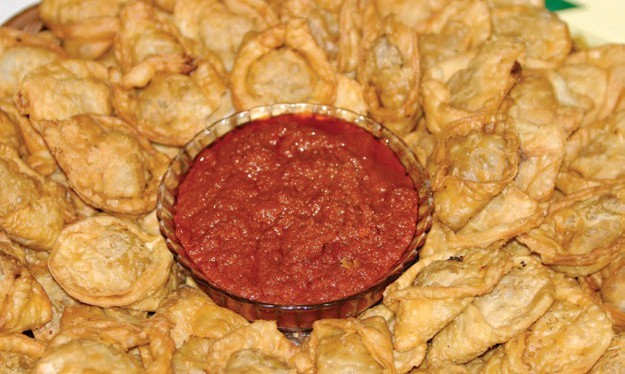 Meat samosas are also common in North India and Pakistan, with lamb and chicken being the most popular fillings. Paneer is another popular filling in northern India.

Samosas are served hot, and usually eaten with a fresh chutney such as mint, carrot, or tamarind. In Punjabi households, dhabas and street stalls, samosa is served with a chickpea curry called channa.

Another popular variation in Indian street food is the Samosa Chaat. The samosa is topped with yoghurt, tamarind chutney, finely chopped onions, and masala. The contrasting flavours, textures and temperatures are sensational. Street food gastronomes, particularly in Mumbai and Maharashtra, are familiar with the Samosa Paav. This is a samosa served in a fresh bun and it is like an Indian samosa burger. This is also how it is served in Kasauli and Shimla – and the bun samosa available in these hills is a major tourist attraction.

The sweet samosa, known as a Mawa or Gujiya Samosa is also eaten in some parts of India, particularly to celebrate Diwali. In some parts of northern India, varieties of sweet samosas include dried fruit. In south India, samosas are influenced by the local cuisine and they are made with south Indian spices. They are also folded differently and usually eaten without chutney. As well as the familiar ingredients, South Indian samosas may also include carrots, cabbage and curry leaves. In Hyderabad, the samosa is known as lukhmi and has a thicker pastry crust and is usually filled with minced meat. The Goan samosa is known as a chamuça and is made with minced pork or chicken. 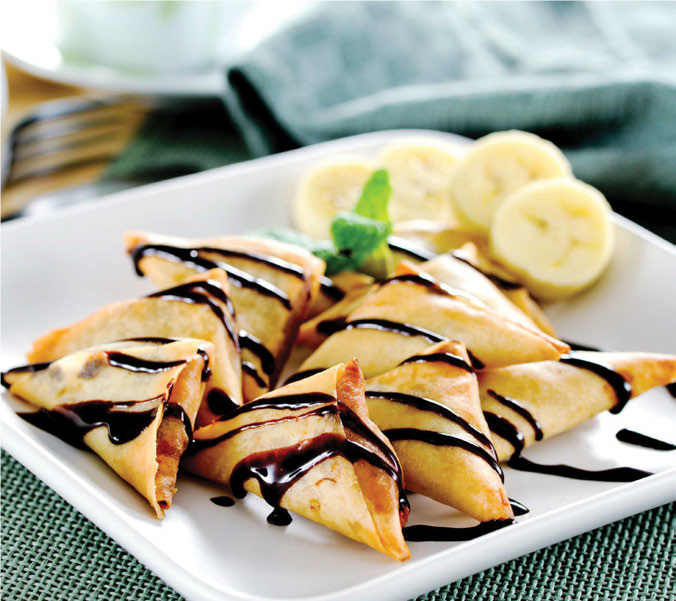 In the globalised world of today, the growing popularity of fusion food has witnessed the advent of the pizza samosa, the macaroni samosa and even Maggi samosa. Dessert varieties inspired by Western cuisine include the apple pie samosa, chocolate samosa and even an ice cream samosa. Another innovation is to make the samosa healthier by baking it instead of frying it, and packing it full of fresh vegetables.

The samosa has become so mainstream that it is now sold in big chain supermarkets. It is available as ready meal, as a ready-to-eat snack in the deli section, and as a frozen food item. Frozen samosas are increasingly available at grocery stores in Canada, the United States, and the United Kingdom.

Samosas are a truly international food enjoyed by millions in various countries (see boxitem). Whether you are travelling to one of the countries, or just sitting in your living room at home, wow your taste buds with the taste of the humble yet fiery samosa.

THE ROAD TO MANDAWA