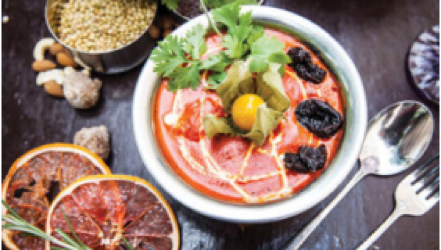 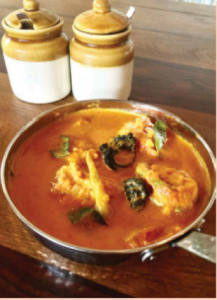 IT’S WHAT KOKUM is to Konkani cuisine, aamchur to north India and tamarind to the rest; and yet, the role of gambooge or kodampulli, which is perhaps one of the oldest known spices of the culinary world, both as a herb and a spice, is much complicated than its peers. Part of its exception comes from its own properties – rich in hydroxycitric acid and garcinia, it can treat a slew of conditions that range from obesity to oedema. Much like its medicinal peers, triphila or even kokum (with which it is often confused because of the similar taste profile), gambooge cannot be consumed in its fruit avatar, which looks like a beautiful pumpkin but is far sour than any human palate can tolerate and needs to be manipulated by first sun drying and then smoking. This, says Chef SabyasachiGorai (FabricaBySaby), gives the spice not only its unique taste character and complication, but also that bitterness with an extra hint of tanginess, which makes it an amazing choice to balance out dishes. Concurs Chef SandeepSreedharan, who uses gambooge in a variety of ways but is rather fond of the cocktail he prepares as a palate cleanser for his special sit-down menus. “The beauty of this rather not-sopretty ingredient,” he says “is its complicated flavour profile. You have to really work more with this spice to understand how beautifully it can lend itself to the dish — be it fish or otherwise — along with the back of the palate smokiness.” An excellent example of how differently it can influence a dish taste, while balancing all its flavours is the Pandi Curry and the famous Kerala Red Fish Curry, even sambar and rasam. No surprise then that kodumpulli is one of the essentials in any Kerala home, especially, says Deccan cuisine specialist Chef Arun Kumar TR (Zeaside), “in Syrian Christian cooking, where it is used to make all kinds of fish and pork dishes, and even sweet coconut milk-based beverages too. The Hindu community of Kerala also is fond of this smoky spice, and pairs it with tomatoes or tamarind to maximize the taste.” Tamarind in fact, add experts, was once a substitute for thisspice, which is considered a close cousin of kokum and can be as versatile. In fact, according to old trade ledgers and Ayurvedic cooking practices, kodampulli was used across meals and sweet beverages served in the port stations to traders arriving and departing to their country. It was then, say historians, “considered to be the magical pill that could cure everything and work the body’s immunity system to take on the vagaries of the sea.” Of course, its popularity back then was not always for its healing properties, but also the smokiness that made every dish breathtaking. Folklore has it that dishes and beverages made of kodampulli were so appealing to the visiting traders that many merchants staying back decided to take it up as one of the main ingredients in their cooking, the Syrian Christian community being chief among them. Kodumpulli’s versatility, adds Chef Gorai, “especially when it was paired with tamarind, kokum, coconut milk or even fragrant herbs and later chillies too, was one of the main reasons that it was so widely used across coastal plains. And good kodampulli, like any other herb, was considered a prize possession.” After all, it could treat any form of intestinal infections and even help lose weight. The recent rediscovery and realization of its properties has also made it a darling of the medicine world, where it is now widely used. Even today, the making of a good kodampulli, adds Chef Kumar, “depends on how well you have smoked the berry fragments. Done well, one can actually bite into a sliver of the spice-herb without cringing and can taste the bitterness and the smokiness quite well.” Interestingly, smoking herbs was a technique used in Ayurveda and Rasayana (the art of cooking) developed on the lines of creating dishes that work to heal and rejuvenate the body. However, kodampulli was an exception since its addition, when and how, made a lot of difference. If you leave it longer for instance, says Chef Kumar, “or in a larger quantity than required, there is a good chance that the food can turn bitter, even unpalatable. And what’s interesting is that the dish is not really repairable, unlike tamarind, which is a malleable flavourant.” This could explain why most dishes that are cooked with gambooge follow a strict guideline and it is advised, says Chef Kumar, “to start by using the juice instead of the cured fruit directly to get a good understanding of how the flavours work.” 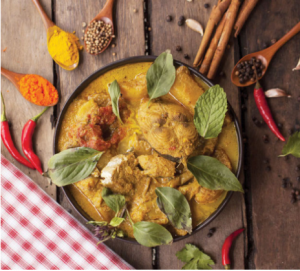